Biden’s Shenanigans and Malarkey Against America! News and Stories You Won’t Hear On CNN! 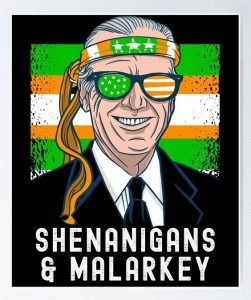 The news continues to be intense and demonic activity seems to increase around U.S. elections more and more as we get closer to the Tribulation.

The U.S. President and Congress affect the State of Israel more than any other entity on earth! So the enemy has a vested interest on election outcomes in the run-up to the Tribulation.

We have the ridiculous January 6 hearings going on live TV—another attempt to stop Trump’s political aspirations and demoralize his political base. However, it may do the opposite.

Over 90 percent of the Trump news during his four years in office was negative, according to NBC News.

Prayerfully, the inside provocation by those in the U.S. government that helped produce this will be revealed. Or the truth that the mayor of Washington D.C., Muriel Bowser, and Speaker of the House Nancy Pelosi turned down President Trump’s suggestion that 10,000 or more National Guard troops be deployed in the event of violence.

We saw the tragedy of Uvalde, Texas, occur as the NRA was about to assemble in Houston for their annual convention with over 50,000 in attendance. Sadly, questionable decisions and inactions by the local police saw nineteen students and two teachers fatally shot with seventeen other people wounded at Robb Elementary School in Uvalde, Texas.

A man who intended to assassinate Judge Kavanaugh was arrested as continued fallout of the leaked Roe vs Wade. There is an increasing likelihood that we will see a high level of violence this summer if Roe vs Wade is overturned and sent back to the states—it could be similar to the BLM and Antifa violence of 2020. Remember those days? Candidate Joe kept kneeling in support of the lawless thugs.

America is facing the moral implosion outlined in Romans 1. And the leftists in the U.S. media are becoming more evil by the day. No organization in the country has done more damage than they. They stir up racial division and spew out lies. Then come more lies to cover their first lies and the cycle continues. They cover up lies of the Biden crime family and his incompetence.

They malign doctors and other medical professionals for opposing the Pfizer, Moderna, Johnson and Johnson jabs. Albert Bourla (the CEO of Pfizer), Tony Fauci and the U.S. Surgeon General Vivek Murthy call vaccine misinformation criminal without offering any specifics, and the media gives them a free ride.

Mainstream media has attempted to provoke Biden to do more in the Ukraine to confront Russia. If Biden were a Republican, the coverage would be ridicule, rebuke, and chastisement, not provocation. There is concern that the Biden actions could lead to a nuclear war with a defiant Putin.

We saw thug politics recently in the arrest of Peter Navarro when the FBI took him off a plane in handcuffs over his January 6 indictment for refusing to testify due to presidential privilege. He was flying to Nashville to be a guest on the Huckabee program.

House Minority Leader Kevin McCarthy said the FBI followed Navarro to the airport and waited until he got on the plane to arrest him and publicly humiliate him. Navarro had been in contact with the FBI but the CNN cameras wanted to film it.

It is time for a U.S. senator and/or congressman with spine to get to the bottom of who is ordering these events and start inquiring about the FBI role in provoking the January 6 riots in Washington, D.C.

We’ve been watching the globalists’ World Economic Forum (WEF) and reset crowd. They have never had a more opportune time, with the Democrats controlling the House, Senate and Biden in the White House. The November 8 election may likely lead to a Republican landslide in the House and possibly picking up a few seats in the U.S. Senate (unless there’s more cheating).

Biden tried to pull a fast-one from the communist manifesto by launching his Disinformation Governance Board inside the Department of Homeland Security. Big disaster! The board was dubbed the “Ministry of Truth” by conservative critics in reference to George Orwell’s 1984. After tapping radical leftist Nina Jankowicz, to head the board, and authorizing her to tell us what’s truth and what’s not truth, Biden yanked the operation under criticism after 3 weeks.
Thankfully we already have the truth and know the truth, His Name is Jesus!

In the meantime, Biden announced Karine Jean-Pierre has been promoted to be Assistant to the President and White House Press Secretary replacing Jen Psaki… (did he just say, “assistant to the president?” Oh boy!). Pierre couldn’t be more unqualified. No worry, she’s a radical leftist chosen on the basis of her queerness and race baiting so she gets the job. Like Hunter, another Biden embarrassment.

Fortunately, 12 of the 13 amendments to the World Health Organizations (WHO) putting the U.S. and other countries under their supervision during times of pandemics were defeated. But they are not finished and have established a panel to study it further.

Here we go again… There are concerns of another coronavirus or other pathogen release prior to the U.S. election, leading to ballots by mail and restricted voting options.

In case you haven’t noticed… oil and gas prices are skyrocketing. Nationwide gas prices are over $5 a gallon for the first time in U.S. history. Travel is becoming unaffordable for a large number of Americans, and it keeps getting worse, not better. I’m starting to cringe when I drive by a gas station and look at the prices.

Biden keeps blaming Putin for this instead of being accountable for his anti-U.S. green-energy nonsense. The one million barrel per day Keystone Pipeline would have helped. During Trump’s time in office we became energy independent and were producing around 13.5 million barrels per day. It is estimated the total is now 11.75 million barrels per day. Vast sums of money that could have stayed in the U.S. are going to Middle East countries to other OPEC producers.

Food shortages like baby formula, sabotaged food products and the Russia-Ukraine war effect on wheat and fertilizer supplies are causing the rapid rise in food prices and famine in areas of the world that have limited financial resources. Since starvation is a big reason for millions dying in the first years of the Tribulation, it would be reasonable to think we could see the seeds of famine being sown on this side of the Rapture.

The Israel – Iran situation is getting very intense. More about this June 21… don’t miss it as I’ll discuss what looks like an imminent war between the Jewish State and the Islamic Republic of Iran. Everything points to it!

And the China-Taiwan situation continues to be intense. Every time the U.S. or the international community speaks of support for Taiwan, China sends jets into Taiwan air space.

Through all of this, in one way or another, our sovereign God is setting the stage for the coming Tribulation period. It’s closing in fast. That means the trumpet call and voice of the archangel could sound at any moment. Hallelujah!