Biden Curse On America Rolls On, Foreign Policy Of Evil Not For Good! 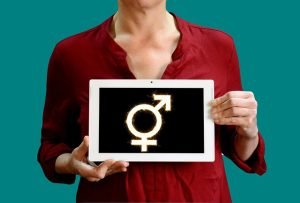 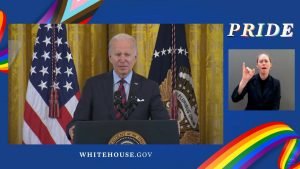 Then in the nations where they have been carried captive, those who escape will remember me—how I have been grieved by their adulterous hearts, which have turned away from me, and by their eyes, which have lusted after their idols. They will loathe themselves for the evil they have done and for all their detestable practices.

Ezekiel 6:9
Immediately after becoming president, Joe Biden turned the course of America directly into the path of God’s wrath in two ways: By cursing Israel and exporting evil.Soon after taking office Biden
ordered the State Dept. that U.S. Embassy’s worldwide need to begin displaying the rainbow pride flag underneath the U.S. flag during his administration. The days of Noah and Lot had officially arrived

Instead of exporting the Gospel of Jesus Christ like our forefathers and sending out Bible believing missionaries to a lost world, the administration began an aggressive mission of exporting evil.

Since then, we’ve become a leader for exporting evil and the laughing stock of the nations.

In phase two, Biden ordered a review of the abortion policies of countries receiving U.S. foreign aid. This was to insure they were in line with America’s radical baby killing policy’s that include killing the unborn up to and even after birth!

Now we learn about phase three of his ungodly campaign with the administration pushing U.S. “gender-affirming policy” on the rest of the world.

Not content with pushing life-altering hormonal and surgical procedures on the children of America, Biden will now be using its foreign embassies to shove its so-called “gender-affirming” policies down the throats of other nations by pressuring them to ban “conversion therapy” for transgender youths. This is a sick mission and sure to bring divine wrath on our once blessed country.

Embassies are instructed to ‘submit information on the so-called “conversion therapy” practices of host countries. “Conversion therapy” is the act of trying to persuade someones sexual preference To carry out the order, and to illustrate just how far gone we are, Biden appointed Jessica Stern as Special Envoy to Advance the Human Rights of LGBTQI+ Persons.

This presents a problem for countries like Sweden, Finland, and the United Kingdom, whose medical authorities have been pushing back against the “extremely weak” evidence supporting “gender-affirming care” for still-developing children.Finland’s COHERE called hormonal and surgical interventions “experimental,” and along with Sweden is “now instructing clinicians who deal with minors to utilize talk therapy as the first line of defense,” Sapir reports. Sweden has banned gender surgeries for minors—surgeries that are practiced in the United States.

The radical foreign policies of the Biden Administration underscore the extent to which America has rapidly fallen where we now sacrifice reason and common sense to the ever-proliferating and increasingly destructive demands of wokeness! Our leaders are like the “blind leading the blind.”

From a prophetic perspective, we’re watching the painful demise of America because we’re in the final stage of the church age and “these things must happen first” as stage-setting for the approaching Tribulation (Luke 21:9).

“But do not fret because of the workers of iniquity.”
(Ps. 37:1-9)
After the Rapture, God’s eyes will be on Israel and America will be sidelined in short order and no longer a superpower in a position to rescue or defend the Jewish State. Israel will be on her own and God will unleash Antichrist as His instrument to humble His chosen people (Dan. 12:7). In the short, 7-year span, also called the “time of Jacob’s trouble” (Jer. 30:7), God will deal with Israel and redeem the Jewish remnant as promised in Zechariah 12:10. The final end will “come in like a flood” (Dan. 9:26) and that’s why now things seem to be happening so fast.How far will America fall before the Rapture? Should we expect a collapse? It would be wise to prepare and get your house in order. The Biden administration is not a fluke that shouldn’t have happened but a divine act sent as God’s curse on America for America’s unrepentant heart and rejection of His Word. Normal isn’t coming back, Jesus is! Sadly, we’re losing our country fast because her time and God’s patience has run out for Israel’s main defender!

So pay attention and keep your eyes on the Lord, spend time in His Word and keep looking for Jesus. 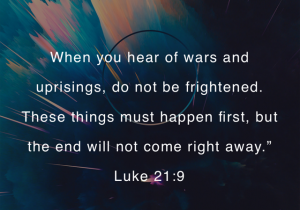