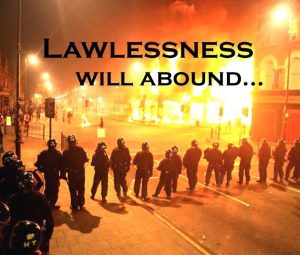 One of the signs of the last days is lawlessness and America seems to be racing down its path.

7For the mystery of lawlessness is already at work. Only he who now restrains it will do so until he is out of the way.8And then the lawless one will be revealed, whom the Lord Jesus will kill with the breath of his mouth and bring to nothing by the appearance of his coming.9The coming of the lawless one is by the activity of Satan with all power and false signs and wonders,10and with all wicked deception for those who are perishing, because they refused to love the truth and so be saved.
2 Thess. 2:7-10

On his third day in office, Manhattan’s new District Attorney, Alvin Bragg, instructed his staff to stop the prosecutions of many serious crimes. They will no longer prosecute people for resisting arrest, prostitution, theft of services, or most instances of trespassing. Where he can, the new District Attorney is downgrading crimes like armed robbery from felonies to mere misdemeanors. That means people using a gun to commit robbery will, in some cases, be back on the streets without ever seeing the inside of a jail cell.

These changes, he said, will “make us safer.”

How would one go about destroying a free nation? When you think about it, the answer is obvious. Inundate that nation with the seeds of lawlessness, then water those seeds. Encourage the weeds of crime while removing good and fruitful plants. Get rid of things like order and justice and trim down the police force. Open the prisons. Make arrests meaningless. Reward evil and penalize good. Carefully nurture a garden of evil. That’s where it seems, the United States is headed.

This country has chosen to embrace and even celebrate all kinds of sin and debauchery. Unless the U.S. turns from this wickedness, it will fall. And that fall will devastate democracies everywhere. On our way down, Satan himself will use American dysfunction to bring ever-increasing chaos to the planet.

America has fallen to the moral bottom insisting that good is evil and evil is good and demanding the rest of the world follow our path to doom. We’ve pushed God out of our land and now we’re paying the price. The Bible describes this coming true in the last days. In Matthew, chapters 24 and 25, Jesus gives a discourse on the time leading up to His return. In Matthew 24:12, He said, “Lawlessness will abound.”