America and Afghanistan in Prophecy. 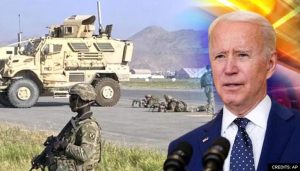 Bad things are taking place in the United States! What are we to make of the Afghanistan debacle and the frenzied takeover by the Talban that unfolded late summer?

For sure it is further evidence on the world stage that America’s leadership and role is greatly diminished. We have an administration in Washington that so mishandled this operation, that the only conclusion is that the catastrophe was deliberate. The message to Israel’s enemies is clear, “we’re leaving… you can take over.”

The details were likely orchestrated by the “useful idiots” in the Biden administration, made up of the haters of America and Israel. Good people were left behind, including an unknown number of Americans as well as the underground church while tens of thousands of Afghanis were allowed to waltz into America, including Muslim men with child brides.

What a contrast. In 2018, Trump harshly sanctioned Turkey until Erdogan released Pastor Andrew Brunson but in 2021 Biden betrayed the Christians in Afghanistan by sentencing them to suffer under the Taliban. It doesn’t get any stranger or any more evil. This is like watching a horror movie play out.

We hear much about the Magog/Armageddon War of Ezekiel 38-39. The 7 “stans” of Central Asia are part of the geography of ancient Magog: Afghanistan, Kazakhstan, Tajikistan, Uzbekistan, Kyrgyzstan, Turkmenistan, and Pakistan. The average percentage of the Muslim population throughout the 7 “stan” nations is about 95% per country. These are some of the Muslim countries who will be among the invading armies pouring into Israel in the final war led by Turkey along with Iran, Libya, and Sudan. 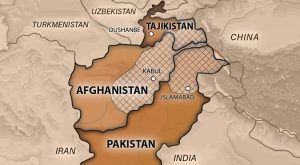 Ezekiel 39:9 says Israel will burn the weapons of this war for seven years. The Biden administration chose to leave $85 billion in weaponry behind in Afghanistan. Surely some of this weaponry will soon be burning in the Valley of Megiddo where the pools of blood are so high they sometimes reach up to the horses bridal (Rev. 14:20).

While the Pentagon claims some of this equipment was dismantled, it can easily be re-built by the Russians or the Chinese. Afghanistan borders China so it’s no surprise the Chinese have embraced the Taliban with bribes for their rare mineral resources.

Iran has already set up a trading post with the Taliban in the city of Herat, Afghanistan, near Iran’s border. In Herat, the Iranians are busy trading Iranian gas and oil with the Taliban for weapons. Meanwhile, as our satellite surveillance watches the trucks coming and going, despite the illegal exchanges and despite the UN and USA sanctions, our feckless government says nothing.

In other words, Israel’s enemies have been replenished with some of the most sophisticated military equipment found on the planet thanks to hard-working U.S. taxpayers. It’s enough to make your blood boil! 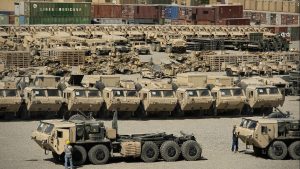 Sunni and Shite, Working Together

The Taliban are close allies with Pakistan who have 100 nuclear warheads which could be significant to the revived Ottoman Caliphate. Turkey has partnered with Pakistan to build Pakistan a new fleet of “Corvette” swift boats to expand Pakistan’s Navy for the coming Caliphate wars during the Tribulation.

I think we’ll soon find sophisticated U.S. weapons in all the Red Nations below. These are likely 7 of the 10 nations I believe that will join together to form the final empire.

Look closely and you’ll notice the sea of red covers geography from the Mediterranean to the border of India. It precisely overlays 3 ancient empires depicted in Daniel 7:2-6 and Revelation 13:2 that forms the location prophesied for the 8th empire of Antichrist. 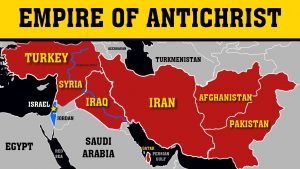 The passage in Ezekiel says no nation comes to Israel’s aid in the final invasion of Israel. Where is America during Israel’s hour of need? This is striking evidence that the world’s only superpower has fallen and turned away from Israel. She’s too sick to lift a hand.

The prophetic silence concerning America seems to show that power will shift away from the United States to such an extent she has no role in prophecy whatsoever. That means we’re heading into a future season in our country that won’t look anything like our past. It could come suddenly by a financial collapse or any number of calamities or the final shock to America’s system could even be caused by the Rapture.

Since we’re living in the shadow of the Tribulation there are numerous reasons to suspect why God would allow the decline of America so rapidly. Here are 3.

Judgment for Sin – God hasn’t turned away from America, we have turned away from God. Beginning 50 years ago, we began outlawing God’s Word and His Ways which has brought God’s curse on our nation (Isaiah 10:1-4) and we are now reaping what we’ve sown.

Rise of the Beast – The superpower status of America, on the international level, will need to be weakened to allow for the rise of the Beast. America still has military bases throughout the Middle East with several sitting on nations that likely will be part of the coming Beast empire including Turkey, Iraq, Qatar and until recently, Afghanistan. Up until now theses bases represented the power and might of the Christian nation of the USA that has prevented bad actors from rising against Israel. The nuclear and missile threat emanating from our bases will need to be depleted to clear the path for the Beast… just as what happened in Afghanistan! These countries are thrilled to see the United States, the “Great Satan” leaving the Middle East.

When the leadership of Israel rejected and crucified
Jesus their Messiah, God postponed completing Israel’s calendar (Dan. 9:24-27) by precisely 7 years. After the Rapture, God will begin fulfilling those final 7 years that lead to the fulfillment of the Abrahamic Covenant and the salvation of Israel’s remnant.

Aside from judging America for its iniquity and rebellion, the Lord’s judgment is also falling because we’ve turned away from Israel. God is taking away His supernatural protection and blessing so that at the end of the Tribulation the U.S. is but a shell of her former self on the world stage and either unable or uninterested in coming to Israel’s aid.

This is what we’re watching in 2021. The major problems flooding into our country are not just random or accidental. God has sovereignly directed them as His way of judging our country. It’s a pattern God used to judge the ungodly acts of Israel’s Northern Kingdom, “In those days… God was troubling them with every kind of distress” (2 Chron. 15:5-6). Paul says it this way, “The wrath of God is revealed from heaven against all the godlessness and wickedness of people” (Rom. 1:18).

America might not be around to help Israel —but God sure is! He devastates her enemies and because of the miraculous nature of the war’s outcome, Israel realizes God was on her side. For the remnant that remains, this begins the spiritual awakening of God’s chosen people.

So how big is your God? If God doesn’t need America to fulfill His promises on the world stage, think of what God can do through a yielded life in the power of the Holy Spirit. Let Him use you!

To evidence the reprobate minds and upside-down thinking that prevails in Washington these days, the Administration is talking about further negotiating with the Taliban. Oh boy! That means U.S. aid! These are heavy handed thugs with a Shariah mindset, motivated by brutality that makes them look more like ISIS than allies. Are we really going to support a regime that rapes women and throw gays off of tall buildings blindfolded? Probably.

America is in more danger of falling than at any time in its history. Bible prophecy predicts this very decline. From this point on, we believers have to get serious. We are going to face discouragement, disillusionment and, most certainly, persecution in the time between now and the Rapture.

But don’t be discouraged or disillusioned. In fact, there’s good reason to rejoice in that we are the generation God has chosen to stand in this hour! The coming turmoil will provide us unrivaled opportunities to share the good news of the Gospel. So be ready to share your faith and your hope with those who need Christ. We still have time to reap a great harvest of souls for God’s kingdom!


Pray for Those Left Behind in Afghanistan

With the Taliban takeover of Afghanistan, more of the end-time stage is being set as the 10-king nations and the Ottoman Caliphate begin to fall into place!

Of particular concern right now in Afghanistan are the many Christians who are in hiding or on the run. The underground Church needs your prayers!

The crisis in Afghanistan has taught us that no number of U.S. resources, training or occupation can change a Muslim nation under Shariah Law. The only way to make a difference is through individual disciple-making.

As death and mayhem continue, one thing is clear: the need for Jesus in the Middle East has never been greater. Now is the time to respond to the cry of our persecuted brothers and sisters in what the Lord is doing to grow His Kingdom.

One underground leader said, “Pray that God puts angels around our home! The Taliban have begun to mark houses with a C for Christian. One of us is always awake during the night, always walking around and praying, so if the Taliban should come and knock on our door, we should alert everyone.”

The Mideast Beast nations are lining up, Israel is being surrounded, America is falling, and the economy is weakening. However, as the Apostle Paul says to the troubled Thessalonians, we can take rest in the fact that Jesus is coming!

And give relief (rest) to you who are troubled, and to us as well. This will happen when the Lord Jesus is revealed from heaven in blazing fire with his powerful angels. He will punish those who do not know God and do not obey the gospel of our Lord Jesus. They will be punished with everlasting destruction and shut out from the presence of the Lord and from the glory of his might on the day he comes to be glorified in his holy people and to be marveled at among all those who have believed. This includes you, because you believed our testimony to you
(2 Thessalonians 1:7-10).

Maranatha!
Even so come Lord Jesus!