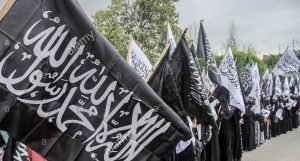 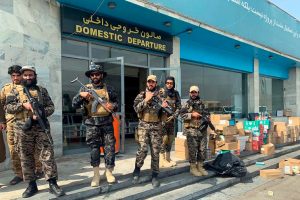 A pregnant woman from California who is stranded in Afghanistan, thanks to the inept US Foreign Policy, said the Taliban is hunting Americans now that the US military has withdrawn fro​m the country.​

The woman, identified by her first name, Nasria, to protect her from reprisals, is among the 200 Americans still trapped in Afghanistan. “There’s been days, you know, where I think to myself, ‘Am I going to make it home? Am I going to end up living here? Am I going to end up dying here?​’​” Nasria ​told Voice of America in an interview recorded on Friday. ​ She said after the US completed its military withdrawal on Aug. 31, the Taliban began “hunting Americans.”

The Biden regime left hundreds of American citizens stranded in Kabul, Afghanistan, as a result of one of the most disastrous military evacuations in U.S. history. Now that America has abandoned American citizens to the Islamic State of Afghanistan the Taliban terrorists are now going house to house and hunting them.
I think we know what will happen when they get their hands on American citizens!

“The wicked shall be turned into hell, and all the nations that forget God.”
Psalm 9:17

Afghanistan ended in complete failure but it didn’t have to happen like that. It ended like that because the demonic, shadow government now in charge in Washington DC is doing its level best to pull America down to the ground. If our own government will do this to fellow citizens, it would be wise not to count on them to have your best interests in view. 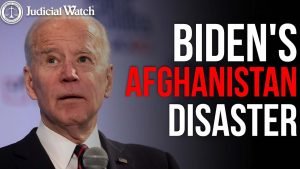 Nasria, 25, said she traveled to Afghanistan in June to visit family and marry her Afghan national husband but couldn’t get a flight out after the Taliban took over Kabul last month.

She described the chaotic scene in the streets around the Hamid Karzai International Airport as thousands of Afghans tried to flee and the perilous ordeal she and her husband went through trying to get a flight.

“It was so hard to just get on a flight,” Nasria said. “There was a couple days where we had to sleep on streets. People were literally stepping over people. That’s how bad it was.”

S​he said she eventually contacted the State Department and was told to ​go to a specific area where they would be met and escorted to an evacuation flight. A​t one point, they were moments away from entering the airport but the Taliban intervened.​

“Our troops were literally at the gate just waiting for us to continue walking and they had blocked us,” ​Nasria said​, adding that the extremist fighters refused to let her proceed despite showing them her passport.​

“There was a time I went past them and started walking as fast as I can, and they started shooting right by my leg and told me to come back. I was only 15 steps away from the airport, and I was told people are going to come out of the airport to get me​. ​S​o what hope am I supposed to have now?” ​she said.​ ​

Her husband pleaded with the Taliban to allow her to leave the country alone, but she refused to leave without him. ​​“My child is going to need a father and I’m going to need a husband by my side,” ​Nasria said.​​
READ MORE