Iran Joins Russia in the War Against Ukraine! EU’s Shameless Appeasement of Iran! 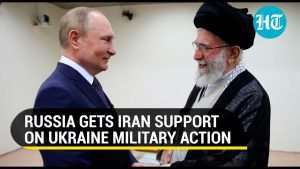 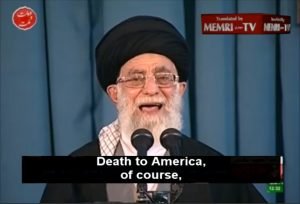 The lame-duck Biden administration has left a vacuum urging bad actors to rise in the world. They smell blood against America and her allies and are beginning to rise.

As soon as President Biden returned from the Middle East, Vladimir Putin made a visit to Iran. A rare trip! As a result, a deal was struck with the Iranian regime giving its backing and full support to Russia’s military offensive against Ukraine.

This is an alarming expansion in Iran’s military ambitions beyond the Middle East and into Europe.

The most alarming comment during the visit was the Ayatollah’s call for Iran and Russia to increase what he termed “reciprocal cooperation” between the two countries to counter the threat of Western sanctions: a veiled admittance to the emerging military cooperation between Russia and Iran.

Biden’s confused position on Iran has recently been exposed by the head of Britain’s MI6 intelligence agency, who told this month’s Aspen Security Forum that, in his view, Iran had shown little interest in negotiating a new nuclear deal. Imagine that! Biden’s policy on Iran has become completely untenable.

Iran is partnering with Russia. Now what will Europe do? Appeasement isn’t working!

In the last month Iran has delivered numerous loads of military equipment, armaments, and drones to Moscow to assist the Russian military in the defeat of Ukraine. Iran’s deepening involvement in supporting the Russian war effort against Ukraine should serve as a wakeup call to Western and U.S. leaders.

While European leaders continue to beg and bribe Iran for some kind of renewed nuclear deal, Russia is cutting off Europe’s energy and Iran is stabbing the Europeans in the back by rebuilding Russia’s war chest.

While in Tehran, Putin met with key figures including Supreme Leader Ayatollah Khamenei and the country’s hardline president, Ebrahim Raisi.

The summit ended with Khamenei praising Putin for launching his invasion of Ukraine, and claiming that Russia would have been the victim of NATO aggression if he had not made the first move.

Since the summit, there has been a marked escalation in Tehran’s involvement in the Russian-Ukraine war.

Russia and Iran signed a $40 billion energy memorandum of understanding between the Russian energy giant Gazprom and the National Iranian Oil Company.

US officials have reported that a team of Russian military experts have twice visited an airbase in central Iran to make a detailed assessment of Iranian-made drones.

This follows a report by the US National Security Council that Iran has provided hundreds of drones to aid Russia’s war effort.

Iran’s very public displays of support for Russia certainly undermine the false assumption of the Biden administration and European policymakers that the Iranian threat, allowing Iran unlimited nuclear weapons, relates only to the Middle East — and specifically against Israel.

This belief is one of the reasons that Britain, France and Germany, the three European signatories to the 2015 nuclear deal, have given their backing to the Biden administration’s efforts to revive the agreement.

Iran’s active support for Russia in its war against Ukraine, which is receiving military backing from NATO, completely refutes that argument.

The expanding military partnership between Russia and Iran is bad news for the world. It’s also bad news for the Biden administration, which has invested all his political capital in reviving the nuclear talks, but now finds itself trying to negotiate with a country that is actively supporting its adversary in the Ukraine conflict.